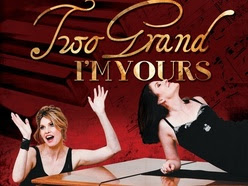 I’d known of Fiona Joy Hawkins’ solo piano work, and stumbled across a series of hysterically wry YouTube videos that she and her concert touring partner, Trysette, produced to help promote their U.S. tour titled Two Grand I'm Yours.  Tickled, I surreptitiously followed the progress of these two dynamic Aussie gals, both indie artists, on their meandering tour of the U.S., wondering how it was they could manage to be on the road for so long.  After all, they’re both gorgeous pianists who compose original music, sing and tell stories; it’s not like they can just throw their guitars over their shoulders and hitchhike cross country Guthrie-style.  There are venues to be booked, piano deliveries to schedule, guest lists to manage, hats to sign...well, more on that later.  Anyway, kudos to them, because apparently they did it pretty much on their own over three months, quite successfully, with good humor, and the kindness of their U.S. concert hosts along the way.

I attended one of the final concerts on the tour, in the greater L.A. area, at the prestigious Thousand Oaks Civic Center.  The show opens with a warm welcome for singer songwriter Karen Nash, clearly a favorite of the locals in the crowd, which includes famed new age musician David Arkenstone.  Previously unknown to me, Nash is an alt-country songstress known for her songs about social justice and troubled love, which she shares with a passionate voice, a guitar, and a touch of edginess.

After Nash’s set, Fiona Joy Hawkins enters the stage.  Her stature is striking; she’s a tall, graceful blonde with cheekbones for which she should surely phone home daily to thank her mother.  Upon being seated, even the impressive grand piano looks no match for her. Her reach easily spans its width, and she takes control of it in her opening piece “Moving On” (from Blue Dream, a co-production with WillAckerman), then wrings out of it all the pain of a challenging life with “Contemplating,” which tells her life story and incorporates her Celtic heritage.   Hawkins shares brief stories behind the music, perhaps too brief, leaving the audience wanting to know more, to understand the passion – and often pain – behind her lush, complex and moving pieces. In one telling bit, she explains that her music is often categorized as New Age because it is emotionally driven. “There is no integrity greater than the intention of a single note,” she says.

Despite all this emotion, one doesn’t feel the need to pity or console her, for Hawkins is not afraid to show her resulting strength.  The primary feeling one gets is solidarity, with her, and her music, capturing and releasing all of our anguish.  She has clearly mastered her coping tools: composing, performing and communing with the piano....and if that doesn’t soothe her, she can always take to the brushes, as she is also an accomplished painter with a gallery full of artwork to show.    After “Love in Winter” (LIVE at the Q) -- part of “Opus for Love” written for her Grandmother who passed away before its conclusion – we’re uplifted by the happier tale of meeting her husband and the resulting piece “The Journey,” which will be on her forthcoming album 600 Years in A Moment (2013).  The set continues with “Freedom/Joy,” “Earthbound” and “Ceremony” which she wrote for her wedding.  I particularly love how she described “Earthbound” as being “about leaving everything you know, everything you own (or thought you owned) and everything you love – and in that process finding yourself.”  Powerful stuff, and thankfully for her, a comment on the past.

Post-intermission, the performers join an auctioneer on stage along with Julie Bach, founder for Spa4ThePink to auction off the hats on which the two artists had gathered signatures throughout the tour. The proceeds benefit Spa4ThePink, and signatures included a who’s who of musicians like Bob Malone (John Fogerty's keyboard player), Mike Baird (drummer for everybody including Journey), Denny Seiwell (drummer for Paul McCartney's band Wings), Kenny Aranoff (drummer for everybody, but currently John Fogerty), Randy Ray Mitchell (guitarist for Donna Summer - 30 yrs), Ben Mauro (guitarist for Lionel Richie), Larry Antonino (bass player for Air Supply) and Marty Rifkin (pedal steel player for Bruce Springsteen).

When Trysette (nee Trysette Loosemore)  next takes the stage, slim in a white summer dress, she seems downright tiny compared to Hawkins, but any assumptions of vulnerability evaporate as she begins to connect with the audience, all warm voice, sassy red bobbed hair, and witty humor.  Wisely, she opens with a treat, a new piece, “Keep Me Dancing” to be recorded and released in the U.S. in 2013.   Her core is in Pop/Rock, although one somehow gets the feeling she’d make a heck of a jazz chanteuse with her husky vocals and subtle sensuality.

As she continues through “Already” (Le Cafe Ancien), “Inside My Dreams” (Neutral Bay Sessions), and “Too Much” (Le Cafe Ancien), it becomes apparent how different these two pianists are from one another, and yet totally complementary. With that, an unexpected dimension of the show evolves, and I find myself wishing that young pianists everywhere could witness this show as an example of the broad artistic freedom open to them and their future in music. Trysette sails through the rest of her set, a mix of uptempo pop/rock and introspective ballads that beg for a drive up the coast with the top down. Fiona Apple, Sarah McLachlan and even a touch of Kate Bush come to mind.  But be warned, after the romance and sensuality in “Sweep Me Off My Feet” (Le Cafe Ancien), “That Face” (Le Cafe Ancien) and a preview of the forthcoming works “Like Water” and “Under My Skin,” you just might feel like falling in love again.

The audience demands an encore, and rightly so.  After Hawkins and Trysette sing “Impossible,” all three artists, joined by Marty Rifkin, perform Trysette’s “Silky Fingers” off Le Cafe Ancien, giving all a sexy, sultry send-off into a warm California night seemingly full of new possibilities for living and loving.