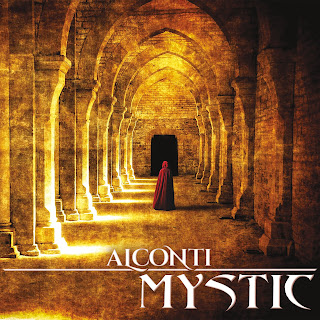 Even before inviting us into the grand sweeping musical experience of his latest masterwork Mystic, Grammy nominated new age and world fusion composer arranger and multi-instrumentalist Al Conti intrigues us with the darkness and light of the CD’s compelling artwork. In a monastic setting, a lone seeker dressed in a red robe stands before a mysterious black door, as sunlight pours through stately columns on the left, but not the right. We wonder, is he contemplating a trip towards the light, or towards exploring the mystery of the other side? Or is he the generator of the light that’s flowing out? As we contemplate these questions, Conti sets the musical stage for this mystical opening of a door on the opening title track by laying down a haunting ambiance behind the ethereal wordless vocals of Charlee Brooks and The Oxford Court Monk Choir.

These vocals bookend the piece and helps it build to a dramatic conclusion – which of course, is just the beginning of the journey. As a sensual groove and exotic keyboard melody take hold, Conti is pulling (or, rather, sweeping) us toward the heart of his exploratory journey – given extra emotional heft by Butto’s whimsical flute solo. Infusing the soul with relaxation, “Trance” puts us in a moody, musically liquid space before evolving into an exotic and hypnotic ballad featuring an elegant lead melody on the Indian santoor (played by Vanil Veigas, whose mastery graces a total of seven tracks).

The chamber music and rock influenced “Contemplation” features the mystical charms of another special guest, harpist Pamela Copus (2002) interacting with George’s soulful violin lines; later in the piece, Pearce’s soulful and crisp electric guitar echoes sweetly over the lush ambience, then creates a hypnotic steel string harmony behind the harp  melody. “Ritual” alternates atmospheric dreaminess with dramatic drums and percussion fills, bells and powerful keyboard chords. Underneath all that is the deep rhythm of a beating heart, as if on a mission to pump life into the spirit. Capturing the lighthearted side of Conti’s fluid musical spirituality, “Devotion” is a playful and poppy, sensual and infectious romp based on a pilgrimage song from the Middle Ages. It was inspired by a visit to a cloister and reflects humanity’s constant struggle to sustain one’s own devotion and balance.


Driven by Conti’s elegant, contemplative piano melody and some later caressing string harmonies and a gentle violin solo by Manoj George, we are drawn into a “Prayer” whose ultimate aim is to become one with the cosmos – and grateful for all things. In this state, it’s easy to have “Visions” of what Conti’s inspiration, 12th Century mystic Hildegard von Bingen, called “the shade of living light.” Conti proves a masterful weaver of trippy sonic delights here, tying seamlessly together a gentle flute line, a resonant santoor melody and a deepening wash of dreamy ambience even before the rhythms enter the picture via Karthik K’s ever present tabla. The stark, ambient and trance-inducing “Pilgrimage” was inspired by Spain’s renowned Santiago de Compostela pilgrimage. It features an initial conversation between dark and light elements via Conti’s keyboard melody and George’s violin – then as the tempo picks up, Conti swirls his ancient flavored keys with a lively, dancing violin and the fiery electric guitar of another guest star, Jeff Pearce.

The artist wraps the collection with “Anima Aeterna,” a contemplation of one of the most mystical concepts of all, the human soul. He expresses this never ending mystery via Brooks’ dreamy vocalizing, lush atmospheres, a unique combination of santoor, electric guitar, tabla and other exotic elements. With this artful, sweeping blend, Conti helps us explore the eternal while inspiring the mystic in us all to engage in our surroundings. Mystic is deep and insightful work that can be grasped on many emotional and spiritual levels. While it can be enjoyed all the way through for its dual ability to relax and exhilarate, upon further careful listens, one comes to appreciate the artist’s incredible tapestry of textures.