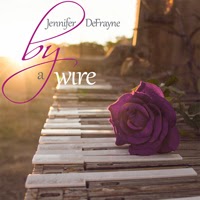 Recently nominated as Best New Artist in the broadcaster-chosen ZMR Awards run (to be awarded live in New Orleans this May), self-taught pianist and composer Jennifer DeFrayne is enjoying renewed interest in her debut album that many have likened to a cross between George Winston and Liz Story, much to her delight.  Below, a new review, just in...

RajMan Reviews: CD Review – By a Wire, by Jennifer DeFrayne: The masterful composing and performing by pianist Jennifer DeFrayne on this exquisite album is all the more impressive considering that this is her recording debut.
Of course, it doesn't hurt that her producers are Grammy Award-winning guitarist and Windham Hill Records founder Will Ackerman and popular recording artist and pianist Fiona Joy Hawkins, who herself is fresh off the success of the Grammy win of an album she contributed to,Winds of Samsara by Ricky Kej and Wouter Kellerman, and who released DeFrayne's album on her Little Hartley Music label....

Read full review
Posted by b at 2:24 PM No comments:

Fantastic Covers of Themes from "Downton" and "Thrones" on INAMORATA 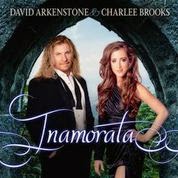 One of the most anticipated music releases of 2015 is a gorgeous collection featuring multi-Grammy nominated musician/composer David Arkenstone and enchanting vocalist Charlee Brooks. Arkenstone’s incomparable music joins spectacular lyrics and vocals by Brooks, who last teamed up on their Mermaid-themed album Loveren.

Speaking from his Laguna Beach home, Arkenstone talked excitedly about this new album of love songs. “There are eight original songs in addition to the themes from Downton Abbey and Game of Thrones, Zedd’s ‘Clarity’ and Sarah Brightman’s ‘Harem.' This time out, we wanted to craft some songs that were more pop/crossover tunes, and we chose a few cover songs that we felt we could bring something fresh to; the lullaby is for my niece, who was born during the recording.”

Often compared to Sarah Brightman and Enya, Charlee Brooks made her debut on their first collaboration, Lovéren, followed by Celtic Garden, and she performs many of their songs with Arkenstone in the epic live concert event David Arkenstone’s Symphonic Adventure currently a popular public television special.
“We usually start with the music…a melody or theme, then Charlee comes up with some evocative lyrics that complete the musical thought I have,” says Arkenstone.

Adds Brooks, “Overall, this record is very sweet, of course, with its deeper moments. The lush strings and arranging that David did on both the originals and covers really move it to another level. When he writes, the lyrics are almost unnecessary as the music itself evokes so much on its own. The additional strings added by David Davidson complemented the tracks so well, he is an amazing violinist. Many of these songs are written from the female's perspective, especially the main title, ‘Inamorata.' This piece in particular is written from a place of longing to be somebody's everything. A reassurance to them that they will be there forever.”

“ ‘Inamorata’ was the first track we wrote and it set the tone for the rest of the album,” says Arkenstone. Brooks continues, “Inamorata is an Italian term for a person's female lover. Lyrically and melodically, this album takes you through many emotional journeys. I feel that everyone has experienced some interpretation of love, whether it was great or just a passing moment.”

Celebrating the 25th year of his impressive recording career that includes more than 40 albums, 20 Billboard hits, film & TV soundtracks and game scores, three-time GRAMMY®-nominee David Arkenstone has established himself as one of the best contemporary instrumental musicians of our time. This visionary continues to create distinctive tracks that inspire the imagination. A musical storyteller, Arkenstone is passionate about taking his listeners on a journey, creating sonic tapestries that evoke every emotion. “I envision a place where I would like to go, or an adventure I would like to take, and let my imagination run free,” says Arkenstone.

Drawn to music and the arts at a very young age, Brooks began singing and dancing at age 3, accompanied by her father on his guitar and other instruments that her grandfather carved by hand. Raised in a small Pennsylvania town, Brooks’ parents encouraged her to participate in all live theater productions, which led to a guest appearance on Carnival Cruise lines at age 11.  At 17, Brooks moved to Los Angeles to pursue her dreams. A gifted audio engineer, she met Arkenstone while recording his tracks for Blizzard Entertainment’s World of Warcraft Cataclysm expansion. This chance meeting led to their collaboration on numerous songs and ultimately their epic orchestral album, Lovéren.

Enjoy behind the scenes videos, and discussion about Inamorata, whici is available on Amazon and iTunes.

The making of INAMORATA with David Arkenstone