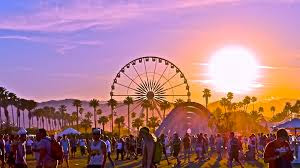 This past weekend kicked off festival season at the Coachella Valley Music & Arts Festival. As a six-time attendee of the festival I can say this was one of my favorite weekends thus far. I am proud to say that there were many female performers this year and many were my favorites including Beyoncé, SZA, Cardi B, Hayley Kiyoko, Khali Uchis, and Jorja Smith. Other stand out performances from Eminem, Vince Staples, Børns, and Portugal, the Man also made for an incredible weekend. If you can make it to the second weekend of Coachella, I would not miss any of these artists. If you weren’t able to attend Coachella, there is a whole season of great music coming from now into fall, here they are listed below.

Kicking off the list is the world-famous Coachella Valley Music and Art Festival. Famous for its eclectic mix of performers and huge art installations that double as lounge areas. This Festival is 3 days long and has two weekends.  Lineup includes: The Weeknd, Beyoncé, Eminem, Portugal the Man and so many more.  (coachella.com)

Right after Coachella in the very same location is StageCoach, a country music fan's heaven. This is another three-day camp out festival with the biggest stars in country music. Lineup includes: Garth Brooks, Keith Urban, Florida Georgia Line.  (stagecoachfestival.com)

One of the smaller festivals on the list is Desert Hearts, held in Warner Springs. Even though it isn't as well known it is for the dedicated fans of underground electronic music who have established a great community. Lineup includes: Damian Lazarus, Acid Mondays, Egyptian Lover.  (deserthearts.us)

This four-day event in San Diego is described as a boutique music festival and conference. Not only is there poolside live music but also pop up shops and yoga & dance workshops throughout the weekend. It is also one of the only festivals that is 21+. If you're ready for an adult weekend of dancing, art, and culture this is the place for you. Lineup includes: Hyenah, King Britt, Doc Martin. (westcoastweekender.net)

Shakti is a yoga, sacred music, meditation, and personal growth festival. This nonprofit supports charities from all over the world and accepts donations to put on the festival and then support the less fortunate. Lineup includes: Shantaya & The Radiant Soul Band, Larisa Stow, MC Yogi. Bhaktifest starts September 12th, lineup TBA. (shaktifest.bhaktifest.com)

Some of the biggest indie and rock acts come together with local LA restaurants to get music and food enthusiasts together in the iconic rose bowl. Lineup includes: Neil Young, Jack White, Kamasi Washington, Kings of Leon, Alanis Morissette. (arroyosecoweekend.com)

Two-day festival in the heart of LA, another one of Goldenvoice’s perfect weekends. Rain or shine, all ages and all genres. Lineup includes: Janet Jackson, Florence + The Machine, The X, St. Vincent, Future. (fyffest.com)

Finishes off the summer with a bang. It is sure to be huge and the lineup isn't even out yet! Lineup includes: TBA.  (hardfest.com)