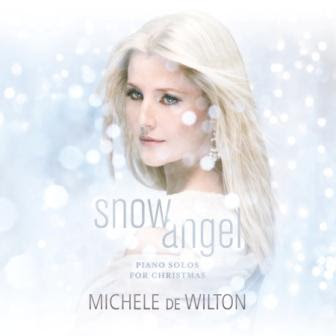 SNOW ANGEL, the third album by Michele de Wilton, sets the soundtrack for the season. The composer/producer/pianist’s third album ushers in the forthcoming Holidays with special songs for celebrating from Thanksgiving well into the New Year.

Upon receiving this album, one is struck by its stunning packaging and design elements, and the appropriateness of the title as it applies to the lovely image of the artist herself. One’s next thought is that this album will be THE ideal hostess gift and stocking stuffer, and that you must immediately order five more in time for the holidays! It is only upon popping it in the stereo that one realizes it will also set the perfect backdrop for all of your holiday activities at home, from entertaining to decking the halls.

Recorded in July and September of 2011, Snow Angel is a one-of-a-kind album that was created and compiled in order to follow the chronological period of Thanksgiving, Christmas, and New Year’s. For instance, the opening track, “Thanks,” is cleverly-titled for the Thanksgiving holiday. “Thanks” is a previously-unrecorded song with a sweeping and joyous melody that sets the stage for the rest of the album—and season. “Snowfall” is another previously-unrecorded original song with which de Wilton evokes imagery of a freshly-shaken snow globe with high notes signifying falling flakes of snow. The cascading piano melodies and twinkling sound effects of the keys connote snowflakes falling at various speeds—all in a cinematic framework of imaginative ingenuity with the likes of Danny Wright and Thomas Newman. In fact, the artist made a special effort to capture the “crystalline” sound by re-recording it on a superbly restored 1909 Steinway Model B piano perfect for reaching the clearest high notes. “Winterbluegreen” is the third original song, with a slow and pensive melody that is as gentle as snowflakes tumbling across a frozen plain. The instrumental song, previously released on de Wilton’s Daydream album, was inspired by “Blue Winter,” a poem by Robert Francis.

The traditional Christmas carol favorites are decked out in all their glory and performed with an amazing array of genuineness, harmoniousness, and joyous piano playing. “Angels We Have Heard on High” is a classic that Michele keeps relatively traditional, but not without infusing a melodious mix of ear-friendly notes. The following piece, “O Holy Night,” is another traditional song that awakens the child-like spirit in all of us, along with “Good King Wenceslas.” Notably, the harp-like embellishments produced on the piano in this piece are stellar. The next set of songs—“O Come, O Come Emmanuel,” “God Rest Ye Merry, Gentleman,” and “What Child Is This,”—is a running arpeggio of holiday enchantment.

Michele pays homage to the Hans Christian Andersen fairy tale, The Snow Queen, on “Waltz for Gerda & Kay.” The story involves issues of good and evil, relationships, and love; Kay and Gerda display love for each other, despite Kay’s abduction by The Snow Queen in her ice palace. The ambulating and seemingly somber piano tones resemble the tinkling sounds of icicles forming, expanding, and breaking. In a similar manner, Michele’s inspiration for including “In the Bleak Midwinter,” stems from a childhood experience at the age of 8, while learning the carol based on a poem by Christina Rossetti in a school in Greece. According to de Wilton, “The heat quit… and it was cold.” Perhaps the warm, sweeping piano melodies in this piece can give an uplifting feeling to make it through life’s rough spots… especially in the season’s midwinter blast of arctic air.

De Wilton includes one live bonus track on the album, “The Ice Maiden,” inspired by a Norse myth about a frost goddess. (See the Ice Maiden music video at http://youtu.be/Q98BhxaK_GQ). First recorded for her debut album, Myths and Legends, during a snowstorm at the Chicago Recording Company in 2008, de Wilton admits that she prefers this live track over the other, and was excited to find a reason to share it with her fans. On “Winter Bloom (Lo, How A Rose E’er Blooming),” de Wilton’s creative licensing soars high, with the song mixing original and traditional melodies that are finely-tuned and interwoven.

At the end of the Holiday season, Michele creates a celebratory homage for the New Year with the addition of “Auld Lang Syne.” The traditional New Year’s Eve ode is full of rippling piano melodies that wax and wane with delicate emotion in an almost reflective manner, promising renewal for the year ahead.

Snow Angel is releasing on Michele de Wilton Records, November 22, 2011; it was recorded on a 1909 Steinway Model B and at the Chicago Recording Company on a Steinway Concert Grand. The album was engineered and mixed by Dennis Tousana, mastered by Steve Sundholm, and manufactured by TSI. The stunning package design by Merge Design & Interactive and photography by Brian Kuhlmann deserve special mention, as both lend to the highly gift-worthy look and feel of the CD. Tenderly, it is dedicated by de Wilton “In loving memory of my grandmother Doreen Grace Robertson, who gave me my first book of Christmas carols.”

The album contains 16 tracks, with a total running time of 50 minutes.