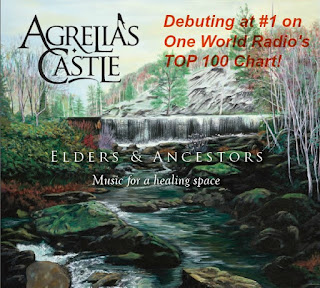 Four-time GRAMMY®-nominated body/mind/spirit record label Mysterium Music is celebrating the news that its 2015 release Elders & Ancestors, by Agrelia’s Castle, won three of One World Radio’s annual awards on June 25th, including Best New Age Music Album, the People’s Choice Award, and (besting a variety of competing genres) the coveted Album of the Year spot. In honor of the husband-wife duo, Paul and April Brown, whose cancer journey inspired the album, Mysterium’s founder Trisha Bowden announced that the label will donate 50% of the album’s July 2016 proceeds to Cancer Support Community(http://www.cancersupportcommunity.org/). The album can be sampled and purchased online at http://www.cdbaby.com/cd/agreliascastle. By its very nature, Elders & Ancestors is a quiet, subtle album born of love and made for healing, not for awards or Billboard charts; it was made for soothing and, as composer/flutist/singer April Brown will tell you, as “an artists’ journey together through the cancer landscape, with songs intended to create peace, joy and hope.” Agrelia’s Castle is the name that Paul and April Brown call themselves when they collaborate musically, and their inspiration to do so comes from a deeply-personal place. April explains “Our story started in June of 2003, when Paul and I met in Memphis on Beale Street. He was playing with a band called FreeWorld. Awesome band. Not two months later, on July 29, 2003, I found out I had breast cancer. So, our story has always been entwined with my cancer journey.” Paul is a GRAMMY® Award-nominated Memphis/Nashville producer and keyboardist (Mike Farris, The Waterboys).

The duo reacted to the awards from “across the pond” by saying, "It's a tremendous honor that so many people around the world have listened to our music and loved it well enough to make this happen for us! What an incredible gift. We are forever touched and humbled!" One World Radio (www.oneworldmusic.co.uk) is an internet-based radio station with a multitude of channels offering music from rock to ambient to new age, as well as new music reviews and artist interviews.

Going back to Fall 2015, OWR founder Steve Sheppard reviewed the album just after its release, writing, “...I am lucky enough to be sitting here listening to this unbelievable release, this track flows so wonderfully, a storm thunders across distant mountains, but the keyboards offer a tone of hope, and as such, the Browns finish off an album with beauty, serenity and with great honour to the ancestors and elders along the way...Elders and Ancestors, is an album that we call one of a kind, it has been manifested from the love of reality, through the darkness of the moment and into the light of a new awareness, superbly produced, deeply moving and wonderfully and honestly performed; I cannot rate this album high enough...”To highlight a few tracks, the song “Spirit Dreaming” features April's Native American-style flute playing and “Sonnet” showcases her soothing vocals. “Breathe” features Memphis sitar Master Richard Cushing with Nashville guitar and cello Master Tom Shinness, and it recalls George Harrison’s Indian-influenced work, both with the Beatles and as a solo artist. Brown’s excellent keyboard work on Fender Rhodes and the Hammond B3 are featured throughout. GRAMMY® Award-winner Mike Farris delivers an unforgettable and impassioned guest vocal on “Wayfaring Stranger.” The artistic album cover of Elders and Ancestors shares a serene landscape painting by April, to match the equally calming music.Additional raves emerged in a No Depression review, with music writer Ted Slowik suggesting that some of the tracks, like “Adrift,” are “...reminiscent of instrumental interludes from Dark Side of the Moon-era Pink Floyd.” Dick Metcalf of Rotcodzzaj.com wrote “...it’s filled with healing power and you owe it to your spirit to immerse yourself,” and Mike Scott (founder/lead singer, The Waterboys) said, “It’s like stepping into a parallel world of this gorgeous hypnotic healing music and April sings like an earth angel.”Trisha Bowden, founder of body/mind/spirit record label, Mysterium Music of Hanover, PA, released the album in 2015, and has championed the music to healers around the world. The album, she says, is good for anyone who needs relaxation and healing. She adds, “I’m so proud of Paul & April, and their debut album Elders and Ancestors. It blossomed from Paul & April’s love into a New Age album, and found cross-genre appeal when Paul toured Europe with rock band The Waterboys, visiting wellbeing & hospice centers wherever he went to share it. The authentic way it has evolved from a healing project into a tool for wellbeing is a perfect representation of what Mysterium Music is all about today. Winning three OWR awards is wonderful validation of the album for both its effectiveness and appeal!”