FEATURE: Soundings of the Planet: A Journey From Video Pioneers to New Age Music and Mindful Meditation

Over 50 years ago in 1970, a young couple -- Dean and Dudley Evenson -- got their first video camera, the Sony Portapack, and they literally helped launch a revolution in portable video. This was the first time that everyday people could videotape what was going on in their lives. Prior to that, only a few television channels made video but suddenly the power of media was in the hands of the people.

However, since there were hardly any playback decks in the country and that period pre-dated VCRs, DVDs and the internet, there were virtually no distribution outlets beyond a few Public Access cable TV shows. Now of course with smart phones, YouTube and social media, video can be easily created and shared.

They traveled the country, seeking, observing, and attending  events of the time. They were mindful of the changing times, and gathered countless hours of footage with artists and gurus alike.  Here is one of the most recently released archive stories:

Chief Frank Fools Crow (c. 1890-1989) was a spiritual and civic leader of the Oglala Lakota (Sioux) tribe living on the Pine Ridge Reservation in South Dakota. He worked tirelessly to preserve tribal sovereignty and treaty rights and led the traditional faction during the 1973 Wounded Knee Occupation. He hosted the first ever negotiations with tribal members and White House representatives on his land. Dean Evenson and the video team had traveled to South Dakota then to videotape the standoff. When the occupation ended, Dean stayed in South Dakota for a month, learning from elders and tribal members about their traditions, their respect for the planet, as well as the challenges they faced.

In 1979, husband and wife team and Soundings of the Planet co-founders, Dean and Dudley Evenson, decided to blend their peaceful music of flute and harp with the sounds of nature and start their own record label. They wanted to carry the message of the earth through their music into urban areas where decisions about the planet were being made. This inspiration came to them directly from their contacts with Native American elders and medicine people. They were also motivated to create a more peaceful and meditative form of music that would support yoga and massage and their evolving spiritual path.

This anniversary video tells the tale...

Music of Peace and Healing...

In this interview, the couple speak with sitar master Deobrat Mishra from his home in Varanasi, India on the banks of the sacred Ganges River. Deobrat represents the 11th generation of the Benares Gharana vocal lineage. India’s rich heritage of music is at risk of being lost so to preserve this precious legacy, Deobrat and his family formed the Mishra Academy of Indian Classical Music which replicates the system of passing down knowledge from master to student. Deobrat composes in traditional Indian raga style and has collaborated with Dean Evenson on the album YOGA MANTRA featuring the Gayatri Mantra and six other devotional chants.

The Gayatri Mantra is considered one of the most important, powerful, and ancient Vedic mantras. A mantra (otherwise known as a chant) is a word, sound, or sequence of phrases repeated, to aid in concentration or meditation. 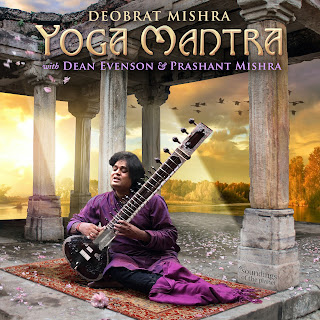 Dean Evenson has always loved the paintings of Claude Monet and now he has experienced in person the beauty of the flower and water gardens that the Impressionist master cultivated and painted for 40 years. For Dean, spending five days videotaping Monet’s gardens in Giverny, France was a dream come true. There are many reasons Dean has been attracted to the paintings and life of Claude Monet. Dean and Dudley created a beautiful album based on their journey.

Life gets better when we think and feel better about ourselves.

This collection of 52 high-powered affirmations is based on practical wisdom helping us affirm and manifest the best parts of our being. Out with the old, negative, and self-limiting thoughts – in with the new, empowering and positive beliefs. Affirmations allow us to recondition, re-program and re-set our perceptions and beliefs with greater clarity and wisdom—so we can be happier, more at peace, and more successful in our lives.

Each affirmation is complemented with beautiful contemplative photography and additional background information, allowing you to go deeper while personalizing each affirmation to fit your own life. Every week, explore and fine-tune another facet of yourself. Being able to focus on one guided meditation a week is an effective way to entrain yourself with more positive thought patterns—while allowing time to immerse, reflect, assimilate and integrate each one of these provocative and positive affirmations.

Incredibly rich content is presented in a pleasing way at the Soundings of the Planet website and YouTube channels. Visit again and again to enjoy hours of watching interviews or relaxing to music and videos; stay tuned for the duo's new lifestyle channel, coming soon!