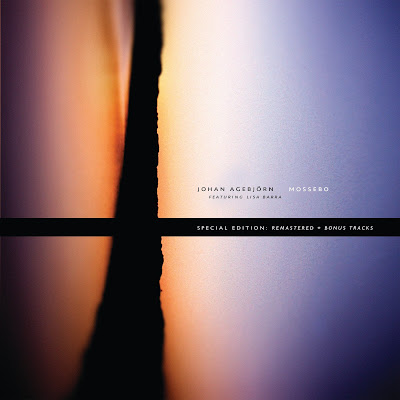 I care about animals, global justice and the environment. I am a vegan and I try to purchase ecological and fair trade products as much as I can. - Johan Agebjörn

Some albums are worth revisiting; MOSSEBO is one of those albums in the Ambient Electronic realm, recently remastered and reissued by the team at Spotted Peccary Music in Portland, OR.


The Los Angeles Times’ August Brown called the original MOSSEBO “a more melancholy and ambient tone poem of an album,” and e/i Magazine wrote that it’s “like some brilliant bolt out of the blue, unexpected, surprising, ever-rejuvenating.” The collection of ambient pieces was composed between 2004 and 2007, and one additional track that was created in 1996; it is an album that is both electronic and organic at its core, with wordless vocals by Lisa Barra winding their way through many of Johan Agebjörn’s dazzling synth compositions.

Barra’s childhood journeys through India led her to an appreciation of the folk music of different cultures, and that passion comes through on these tracks to express an array of emotions that range from soothing to foreboding, to uplifting; challenging emotions to convey in the world of electronic music. The socially-aware artists have agreed that the entire artist’s share of the royalties for Mossebo are going to be donated to the United Nations High Commissioner for Refugees (UNHCR).

Agebjörn recalls the origin of the album: "In 2004-2005, I experienced a period of illness and unemployment, locating myself in a 19th century cottage in Sweden, called Mossebo. There, isolated in the countryside, I started composing, mainly acoustic piano music and electronic ambient music, influenced by the landscape around me.”

The angelic voice of Gothenburg-based vocalist Barra graces more than half of the tracks. Agebjörn heard her in 2003 at a performance for an animal rights event, and started to sample her sound for his ambient creations in 2004. “I sent her the results, and she liked what I did, so we started to record some new songs in a studio. We also performed the songs live at a concert in Linköping in 2005.” The performance was aired on regional TV and a small part of “Unitas Vitae” is on YouTube:

There are two Bonus Tracks on the new Special Edition. “Kyrie Eleison” (“Lord Have Mercy”) with Barra’s ethereal vocals, and the bittersweet “Unhappy Love.” The new tracks add a spiritual dimension and a thoughtful romantic epilogue. Overall MOSSEBO has an expansive, techno-ambient, melancholic feeling, with a lush textural color range, expertly mixed, produced and mastered. A remarkable journey through electronic terrain.

This special edition of Johan Agebjörn‘s full length debut, MOSSEBO, includes the original album plus the two previously unreleased tracks from the era, all meticulously remastered by Howard Givens in 24-bit clarity from the original mixes.

Mossebo: Special Edition is accessible in most formats via Spotted Peccary Music.