FLOW Schedules Tour for May 2018 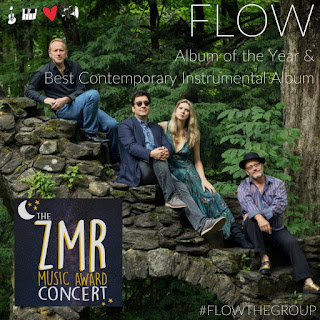 One of the most exciting new acts on the music scene, FLOW, announced The Arrival Tour, a series of live performances in select cities, including a kick-off at The New Orleans Jazz Museum on May 10, 2018 at 8 pm.
FLOW creates music that feels somewhat nostalgic, yet fresh and energized. The ensemble is comprised of four innovative, critically-acclaimed and highly-awarded independent artists: legendary GRAMMY®-winning guitarist Will Ackerman, pianist/singer Fiona Joy, acoustic guitarist Lawrence Blatt and trumpet and flugelhorn player Jeff Oster. The group debuted live to a sold-out crowd at Carnegie’s Weill Hall last October and is slated to perform May 10, 2018 at The New Orleans Jazz Museum, and at the 14th Annual Zone Music (ZMR) Awards at Roussel Hall in New Orleans on May 12th, before commencing on their West Coast dates including Seattle, Novato, CA and Los Angeles’ famed GRAMMY® Museum.
Simultaneously, the group is nominated for two key Zone Music Reporter Awards (“Album of the Year” and “Best Contemporary Instrumental Album”) and two International Music Awards (IMAs) including “Best New Age Album” and “Best New Age Song” for their self-titled track “Flow.”  This is must hear music for lovers of guitar, piano, flugelhorn and that sweet California sound made famous by Ackerman at Windham Hill not too long ago.
See more at https://www.flowthegroup.com/thearrivaltour/