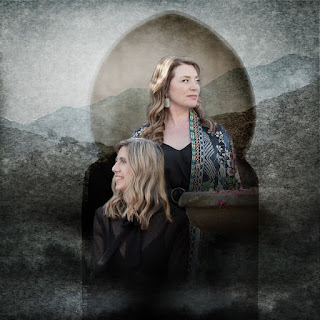 Introducing Shunia: The duo with a global sound!
The pundits say the music of Shunia will transport you, which would certainly fulfill a wish for many in these challenging times. Watching the latest video “Sa Re Sa Sa” shows how right they are!
The duo – Lisa Reagan and Suzanne Jackson – has created two albums of genre-defying new age/global music to date. Their first album, Ascend was produced with the renowned Thomas Barquee. On their new self-titled album, Shunia, they collaborated with Tony Award®-winning producer Jamshied Sharifi, lauded for his work on Snatam Kaur’s GRAMMY®-nominated album, Beloved.
SHUNIA did a soft launch on January 15, but the full album is just now releasing to radio programmers. It features the fusion of classical instruments from different countries, multiple styles of vocals, and the focusing energy of ancient chants, to bring feelings of joy, hope, and awareness to Western culture at a crucial moment in time.
Moroccan artist Hassan Hakmoun joins Shunia on the new album that blends Sanskrit chants, Latin prayer, ancient poertry by Rumi, exquisite vocals (both artists are operatic sensations), and orchestration into a sound that feels both new and timeless.
The duo previewed SHUNIA at last year’s ShaktiFest Reunion November 13-15, which celebrates the devotional paths of yoga, Kirtan (sacred music), and meditation and launched the album on January 15, 2021.  They've since been featured in Eden Magazine, Global Heart, Seek the Joy, LA Yoga, Tones and Drones, and on national radio shows such as Echoes.
Enjoy the uplifting single “Sa Re Sa Sa” featuring Hassan Hakmoun on your favorite platform: https://fanlink.to/d24u
Or, enjoy the high-energy Sa Re Sa Sa video:
About the duo:
Shunia is a duo that combines addictive melodies, ancient chants and polycultural rhythms into a sound that feels both new and timeless. Their music captures and conveys deep energies and spirit. The state of “shunia” means stillness, receptivity. Shunia’s members, Lisa Reagan and Suzanne Jackson both performed with the Washington National Opera for 20 years before finding continued success in their solo careers. Coming together as Shunia, they combined their influences, inspirations and experiences to create genre-defying music with the power to transform and to connect you to the energy within and around you. It can put you in touch with something as simple as your five senses or as mysterious as the infinite.
Additional videos:
“Akal”
"Alleluia"
"Breeze at Dawn"
“Wah Yantee” (from their first album, Ascend)