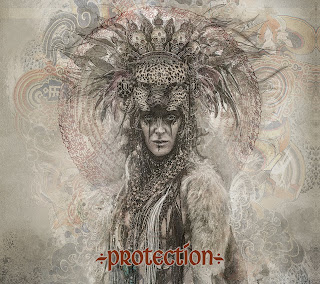 The long-awaited album Protection by Rigzin came into being this November, thanks to a successful Kickstarter campaign. Protection completes an artistic Sacred Trilogy of albums that consist of ancient Tibetan "protection prayers" set to Rigzin’s unique mélange of world-inspired music. With her primary life’s purpose being her dedication to her studies of Tibetan Buddhism, Rigzin never imagined herself becoming a musical artist. She had never considered incorporating her knowledge of Buddhist chants and prayers into any sort of creative endeavor until the unique plaintive beauty of her voice was heard as she prayed for a friend's dying mother. Later, she was introduced to the creative group “El Circo” and she   Her avant-garde approach to melding her practice with her art took the West Coast underground music scene by storm and led her on a path of performances at such events as Burning Man, Lightning in a Bottle, and Symbiosis.

The introductory track to this album titled “Call to Awaken” is a very intimate moment with the artist. There is minimal instrumentation save for some drumming and atmospheric sounds that carry Rigzin’s femininely soft yet fierce voice through a traditional prayer. In an unexpected twist, “Red Lotus Dakini” fuses modern day electronic world music with samples of a man chanting. Produced by the influential DJ David Starfire, it is quite upbeat but still possesses a trance-like quality. The fusion of the modern and the ancient make for a very intense and unique experience.

It is hard to categorize a commercial genre for Rigzin’s art, but it is undeniably spiritual at its roots. After the surging burst of energy that came before it, “Prophecy” shifts the mood into something more sonically mellow yet equally as intense.  Her evenly toned chants are met with droning sounds that crescendo with the use of battle drums and a rise in volume and dynamics. Something to be noted about this album is its perfect balance in the way that it ebbs and flows.  Despite the seemingly ominous title, “Wrathful Guru” is a beautifully cascading track that displays an airier, breathier side to Rigzin’s vocals. It is a light and beautiful yet still dynamic piece speckled with tambourine, electronic piano and a variety of dreamy synthesizers. The title track “Protection” gets back into some earthier, somewhat guttural chants that send the listener into a meditative headspace. Carried by darker, deeper synth, the song is accentuated by sublime shifts in beats and various atmospheric sounds.

Deeper into the album, both “Vajrasattva” (produced by Kalya Scintilla) and “Kilaya” utilize similar structures and textures. Less concerned with typical song structure, these two tracks focus more on creating a soundscape that the listener can get lost in. They are undeniably appealing and hypnotic, an experience from beginning to end. In a similar yet far less calculated manner, “Protectors of the Land” is ten minutes of discordance, perhaps cries of the land?  “Heart of the Lotus” allows her to experiment more within the art of noise. Her fearless approach to making this album is what gives it such heart. Finishing up, “Bodhicitta” mellows out the mood once again introducing a jazzier sound and allows Rigzin’s voice to shine once more. The piece swells with gratitude and love almost as if to thank the listener for going down this journey alongside her. 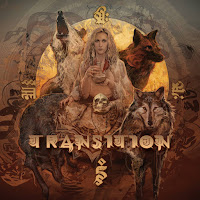 Rigzin Tromge (her civilian name) is an artist through and through. She is fearless, wise, curious and gifted. With her combination of old-world knowledge and modern-day sensibilities, she is able to reach a much wider audience than she ever expected and bestow her gift unto people who love her for who she is.  Surrounded and supported by fellow artists including the visionary Android Jones, whose visual art adorns the Sacred Trilogy. Collaborating producers include Surround, Maximillian Malone, David Starfire, Kraddy, Biolumigen, Kalya Scintilla, Kmin, Chris Sia, and Random Rab.

To listen and learn more about Rigzin, go to rigzinmusic.com where all links are available, including a connection to Bandcamp where she offers cool Tibetan merch and the full Sacred Trilogy of albums Union, Transition, and Protection, which are also streamable everywhere.